All The Information You’ll Need About Palermo Airport Taxis

Millions of visitors from around the world come every year to the southern Italy city of Palermo, which is renowned for its culture, architecture, great weather and more. The vast majority of tourists will start their vacation here by landing at Falcone Borsellino Airport, also known by its International Air Transport Association code of PMO, or simply just as Palermo Airport.

The airport is located about 22.1 miles (roughly 35 kilometers) from the center of Palermo, and there are several transportation options for getting between the two destinations. You could take a bus or train, rent a car, or get a taxi. There are several advantages of a taxi ride, including the fact that you will be traveling only with your companions, your luggage will be safely secured in the taxi’s trunk, and the ride will take you directly to wherever you are staying during your trip.

Where to find taxis at Palermo Airport

After your flight has landed and you have gone through passport control and collected your luggage, you should look for signs within the airport pointing you in the direction of the waiting area for taxis. It’s located outside of the arrivals section of the airport terminal, but if you’re having trouble finding it simply ask an airport staff member for directions to the taxis.

You can recognize Palermo Airport taxis by the fact that most of them are colored white, and they’ll have taxi signs as well as taxi company names and telephone numbers written on them.

If several taxis are already waiting, join the queue for getting a ride, and if there are no taxis currently at the airport it should take no more than 20 minutes for another one to arrive.

Fares and other charges for Palermo Airport taxis

The price of your airport taxi ride will depend on exactly where you’re going, with the average cost of a trip into the center of Palermo being about €50. Rides are charged based on the time and distance traveled, so a shorter journey will cost less and a longer journey will cost more.

It should take about 40 minutes to get into the center of Palermo from the airport, although it can take more time during busy traffic periods such as rush hour and less time in quieter periods.

There is a 25 percent additional fee to pay on top of your regular taxi fare if you are getting a ride between 10am and 7pm daily, although no such surcharge applies at other times.

One way to potentially lower your travel costs is to use the shared taxi service, through which you agree to get in the same taxi as strangers who are traveling into Palermo, and the driver will decide the best route for dropping you all off. Although this can take more time than just paying for a taxi on your own, it can be much cheaper and cost as little as €8 for your journey.

If no Taxi is available you can call the taxi service by telephoning one of the numbers below (about a 20 minute wait).

There is also an information desk outside the arrivals area

Two platforms are located at the airport arrivals area for the taxi sharing cars.

The price is about 8 euro per passenger and it will be applied only with a minimum of 4 users.

The service is provided by the foolowing companies:

Although there are several benefits of taking a taxi from Palermo Airport into the city, such as privacy and being taken directly to your destination, there can also be some drawbacks. The primary disadvantage of this method of traveling is that some drivers are not honest, and they will try to trick you into paying significantly more for your taxi fare than you actually owe.

Taxis from the airport are charged on meters, with the rate based on the time and distance of your journey. Usually this meter will give an accurate reading of how many Euros the ride costs. While the vast majority of taxi drivers at the airport are hardworking and trustworthy, some unfortunately will try a trick of pressing a button on their meter to increase your fare. One way to avoid this is to always keep one eye on the meter and tell the driver if the fare suddenly increases by a large amount, because there are no legitimate reasons for this to happen.

You should also ignore any people that approach you within the airport terminal and claim to be taxi drivers who can give you a much cheaper fare than the taxis waiting in the officially designated taxi pickup area. Anyone coming up to you inside the terminal is likely an unlicensed driver who will typically make you pay much more than the fare you’d get with an official taxi.

Unlicensed drivers tend to not have insurance, which means that if you get in an accident and get any medical bills or other expenses, you might not be able to claim them from the driver. That could create a very stressful situation for your trip that will generate avoidable costs.

A good way to avoid being tricked into taking an unlicensed taxi is to follow the signs to the official taxi pickup area at the airport, which is located outside of the terminal arrival area. Look for taxis that are white in color and have taxi company names and logos on their sides.

Before your flight, you should also consider searching online for the most direct route between Palermo Airport and wherever you are staying in Italy. And then once in the taxi, you should ask the driver to keep to that route. Sadly, some drivers will take you on unnecessarily long journeys to your accommodation because this will push the overall fare up due to the greater distance.

It’s also a good idea to keep some loose change with you, especially if you want to tip your driver for a decent ride. One trick that can happen is that a passenger needs to pay for a relatively low fare, such as €20, and only has a very large denomination note such as €50. The driver will claim that they do not have any change to refund the difference, and will keep the €50. You can avoid this completely by having a number of smaller Euros with you at all times. 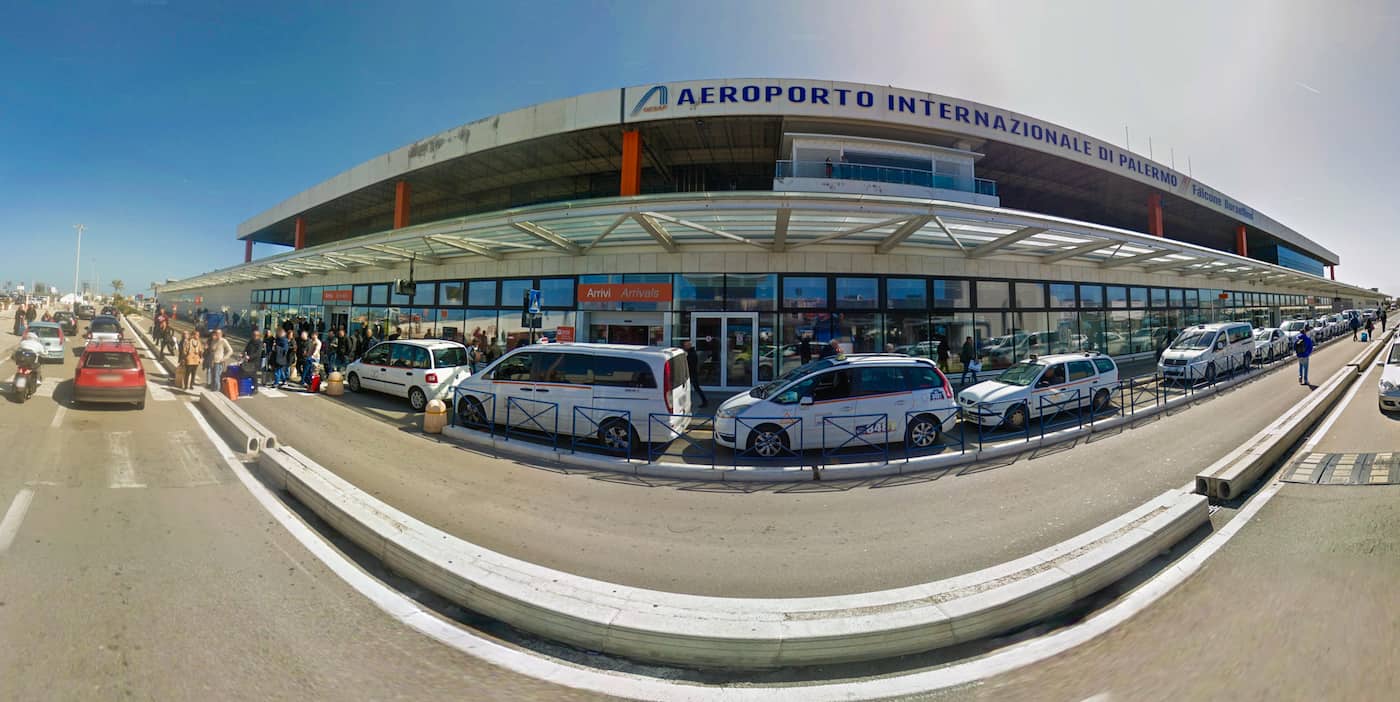 Where can I find taxis at Palermo Airport?

After your flight has landed and you have cleared passport control and retrieved your luggage, just look for signs to the taxi pickup area, which is located by the airport terminal’s arrivals section. You can also ask an airport staff member for directions if you need them.

Are taxis from the airport charged by a flat rate?

No, taxis that take you from the airport to Palermo or wherever you’re staying will be charged by a meter, with the rate based on the distance and time of the journey.

How will I be able to identify a taxi at Palermo Airport?

Official taxis that are authorized to pick passengers up at the airport will be painted white and they’ll feature the name, telephone number and logo of their taxi company on the side.

What’s the average cost of a taxi from Palermo Airport?

The precise fair will depend on exactly where you are traveling to, and the further away from the airport you go, the more expensive the taxi fare will be. But as a general guideline, the typical cost of a taxi from the airport into the center of Palermo is about €50.

What’s the distance from the airport to Palermo?

Palermo Airport is located 22.1 miles (about 35 kilometers) from the center of the city, although the hotel or other accommodation you’re staying at could be closer or further away.

How long will the journey take from Palermo Airport to the city?

You can expect an average journey time of about 40 minutes to get between the two destinations, although it might take less time during quieter traffic periods such as the very early morning, and it could take more time at peak traffic periods, for example during rush hour.

Am I required to pay my taxi driver a tip?

No, there are no rules or laws that say taxi drivers must receive a tip at the end of your ride. And you should certainly feel justified in not leaving a tip for a ride you consider unsafe. But if you were given a safe ride to your destination, you should consider tipping a few Euros.

Should I accept a ride from a taxi driver inside the terminal?

No, if someone approaches you in the terminal and promises a cheaper ride, ignore them because they are unlicensed drivers who generally scam tourists by making them pay much more than the fare they would have paid with using an official airport taxi.

Will I have to pay any surcharges for my taxi ride?

It depends on the time of day at which you’re taking a taxi from Palermo Airport to the city center, because a 25 percent surcharge will apply between 10am and 7pm.